"Juno and the Paycock" at the Irish Repertory Theatre through May 25, 2019 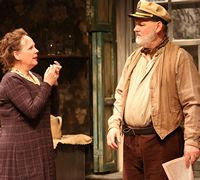 What Sean O’Casey’s political tragicomedy “Juno and the Paycock” lacks in plot, it makes up for in characterization. Under Neil Pepe’s splendid direction for the Irish Repertory Theatre, characterization gets its due. Pepe, who is currently the Artistic Director of the Atlantic Theater Company, has made the O’Casey play resound with a riveting ferocity. O’Casey wrote the terrifically subversive play in 1924 eight years after the Easter Uprising of 1916, and only two years after the terrible Civil War. He labeled it rightly “a tragedy.”

That may be true enough, but the bracing lyrical humor of its lowly Irish folk is expressed on such a high and impressively theatrical plane that it serves to empower rather than to defuse their disconsolate lives and the tragedies that befall them.

The story of a chaotic family that misguidedly lives on credit in the false belief they have come into an inheritance is a doozy. The play’s power in how it provides the full flavor of the Irishness that so richly pervades and energizes this production. Enfolded within designer Charlie Corcoran’s stunningly dingy set and enhanced by the dowdy costumes from co-designers Linda Fisher and David Toserand, the major and peripheral players mine the blasts of poetry even in the midst of the play’s abject realism.

Maryann Plunkett’s tough-love-performance as Juno the razor-sharp wife and mother of an impoverished Dublin family is extraordinary in its poignant simplicity. It frames Juno’s passionately Catholic instincts with the stirring sobriety of her pagan goddess namesake. Ciaran O’Reilly is vaingloriously blustery as the ale-bloated blarney-spouting Captain Jack Boyle, the “Paycock” who, citing the questionable pains in his legs as an excuse, refuses to look for work even when it falls into his lap.

As Joxer Daly, the Captain’s drinking partner, John Keating suggests the duplicity of fragile relationships, as he polishes off more than poetic quotations and half-remembered songs. Ed Malone gives a passionate and poignant portrayal of the wounded son Johnny, who suffers from nightmares and hallucinations, but who has more to worry about when his allegiance to the Irish Republican Brotherhood is questioned.

Sarah Street affixes a beautifully plaintive courage to the role of Mary, the family’s main provider and a member of the currently striking union. Spurning her ardent wooer Jerry Devine (Harry Smith),Mary is seduced and abandoned by Charles Bentham (slickly played by James Russell), a school-teacher and lawyer who brings the news of Jack’s inheritance, and without warning leaves town when the windfall falls through.

The play has its melodramatic digressions, such as the extended scene in which the mourning Mrs. Tancred, (wrenchingly played by Una Clancy) details the murder of her activist son to the Boyle family while on the way to his funeral. The somber tone is well times put a  damper on an impromptu songfest in which the Boyles and their obstreperous neighbor Maisie Madigan (a terrific Terry Donnelly) display a little harmonic a capella virtuosity.

But it remains for the virtuosity of O’Casey’s writing to take us from boisterous comedy to dispiriting situations, to tragic results, and yet leave us with a sense of the heroic. This, in the person of Juno, who, unlike her loafer of a husband, sees “the whole world in a state o chassis!” (a corruption of the word chaos) and remains indomitable and a survivor.

Posted by Simon Saltzman at 7:59 PM