“The Skin of Our Teeth” at the Polonsky Shakespeare Center 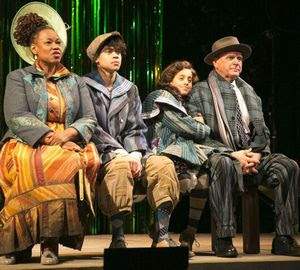 David Rasche and Kecia Lewis as Mr. and Mrs. Antrobus, Reynaldo Piniella and Kimber Monroe as their children Henry and Gladys.


Mankind’s ability to survive a confluence of horrific disasters, mass destruction and uncontrollable mayhem caused by wars and climate change is the subject of Thornton Wilder’s 1942 comedy “The Skin of Our Teeth.” This comical allegory has both delighted and distressed audiences (and critics) since its premiere and its subsequently checkered production history. As the world turns, with its volcanic eruptions, earthquakes and floods and its people contending with holocausts, plagues and basic survival, we can look at Wilder’s cartoonish view of life as unending turmoil as a sign (believe it or not) of hope.

We are now getting a impressive view of Wilder’s durable American family in their home in Excelsior N.J. in a terrific production by Theatre for a New City at the Polonsky Shakespeare Center in Brooklyn, N.Y. Mr. and Mrs. Antrobus and their son and daughter are viewed over a mere five thousand years in this play that won a Pulitzer Prize and preceded future expressionistic drama known as “theatre of the absurd” and “black comedy.”

In 2017, the play still seems clever and given its wordiness is often pretentious. But it also retains its timeless perspective. However it is its unique structure and its zany comic spirit that survives best. As directed by Arin Arbus, the play is enhanced with an edgy comical verve as well as some whimsically interpolated musical numbers that makes it both playable and palatable. Giving a lilt to the inherently bizarre doings, Arbus keeps the action exuberant even in its darkest moments and there are plenty in the third act. And there is more than just a prescient and poignant chill in the air with the advance of an ice flow as scores of refugees are given shelter by the Antrobus family.

One of Wilder’s novelties is a theatrical conceit that allows the characters to fall out of character to remind us what a flimsy piece of theatrical satire we are witnessing. There are also occasional interruptions by the stage manager who is experiencing his own crisis. Lily Sabina is one of the great roles in the American theater (Tallulah Bankhead originated it to great acclaim.) It’s a showy role that serves as a kind of spacey chorus, as well as doubles as a housemaid and seductive femme fatale. Sabina is both the author’s trumpet and strumpet ; the eternal temptress. She is acted quite irresistibly by Mary Wiseman who delivers the right touch of bubble-headed sassiness.

An impressive company of seventeen, many playing multiple roles, move about the spectacular often in motion unit setting designed by Riccardo Hernandez and through the centuries with determined aplomb. Notable performances are by David Rasche as a stolidly determined Mr. Antrobus, the inventor of the wheel and the alphabet and Kecia Lewis as the long-suffering , steadfast wife. Mary Lou Rosato had a good time filling us with terror as with the Fortune Teller. Also excellent are Kimber Monroe and Reynaldo Piniella as the Antrobus children who grow up for better and worse. There were a few instances of updating the text but the core of Wilder’s play remains undated and unsullied by times and tides.